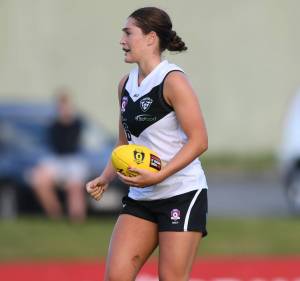 The Southport Sharks have backed up their first ever win in the QAFLW with their first win at home in the competition, defeating Coorparoo by 54 points on Saturday Afternoon.

He explained, “We played the way we wanted to play, ticked off our key performance areas, and everyone had a good handle on their role for the team.”

Southport conceded only one goal for the game, Davis putting it down to all three areas of the ground doing their part.

He said, “We have a nice balance from our inside contested work from what our midfield and forwards do, but also our outside run from our backs, wingers and half forwards.”

Georgia Breward showed again her incredible ability to win the ball at the contest and get the ball forward, and Gold Coast Suns player Giselle Davies kicked three goals.

It was a momentous day for the club, holding their first ever VFL/QAFLW triple header and Davis said the group lifted for the occasion.

Davis claimed, “It was an exciting day for the footy club and the Gold Coast. We have a good grassroots pathway at Southport for aspiring AFLW players on the Gold Coast, and hopefully, we were able to showcase that on Saturday.”

On Saturday, Haze-Lee Martin made her senior debut, and in the second half in particular, showed her ability proving the club has great depth in the Reserves.

Davis said, “We have a great depth of talent on our list which is good for the club and the continual push for girls to develop their game in the Seniors and Reserves.”

“I was over the moon that the Reserves girls were able to get a win on Saturday. It’s a great reward for the effort, and it’s so good to see so many girls putting their hand up for senior selection.”

Attention quickly shifts to a tough road trip against Maroochydore, with the senior’s game being played at 2:00pm on Saturday at Maroochydore Multisport Complex.

Southport’s QAFLW Reserves have won their first game ever, defeating Coorparoo by 11 points on Saturday Night.

It was an exciting night for the club as the Reserves ensured it won all three grades in the Sharks’ first ever QAFLW/VFL triple header, winning 4.7 (31) to 2.8. (20).

Sharks coach Mal Smith explained the win was like a proud Dad moment.

He said, “It was a proud moment when that final siren went. The girls have worked so hard all off-season and it was great to see them rewarded for that effort.”

Southport continued from where they left off in the second half last week, winning the ball at the contest.

Smith admitted, “We took a lot of confidence from our second half performance last week. The message for this week was about maintaining it for four quarters.”

The Sharks were led by the smallest of margins at quarter time and extended the lead to 13 points at Half Time.

The lead grew by a point in the third quarter, and after a few nervous moments in the fourth quarter were able to hold on by 11 points.

Smith said, “We wanted to finish the day well for the club. We had the belief we could win, but to do it feels so good.”

“We have so many talented young girls in our team, which is exciting, and on Saturday night, we got to see that excitement.”

Darcie Davies and Caitlin Miller were excellent again in the midfield and Indira Maradani played well in the forward line.