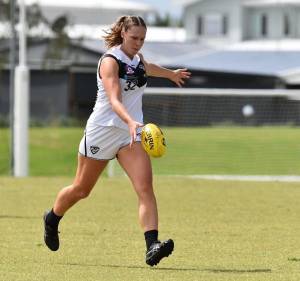 The Southport Sharks go into the Easter break undefeated after defeating Maroochydore by 14 points at Maroochydore Multisport Complex on Saturday Afternoon.

Southport Coach Ryan Davis was very happy with the result.

He said after the game, “It was a finals type game, with how contested it was. So, I’m very proud of the girls that they were able to withstand that and win.”

The Sharks started a bit sluggish, trailing by a point at Quarter time but they broke open the game in the second and third quarter.

Southport led by 25 points at three quarter time, and in the last quarter Maroochydore threw caution to the wind to try and pull off a remarkable comeback.

Despite, not being able to the score the Sharks held on to secure a critical victory against a quality outfit and head into the Easter break with three wins, and on top of the ladder.

Rhianna Schipp, Casey Wynne, Serina Priest and Leigh Alder were leaders for the Sharks in a defensive sense making sure Maroochydore’s quality midfield and forward line couldn’t get on top.

Maggie O’Connell and Caitlin Miller showed their promising talent on debut. O’Connell’s third quarter goal a highlight in the victory.

Britt Perry showed her star power kicking another three goals, and in the middle, it was the usual suspects – Lilly Pearce, Georgia Breward and Maddy Watt who were pivotal in the win.

It was a significant win for the Sharks who now have a week off. Southport are on top of the table and are the only team still undefeated.

“The thing I’ve liked the most is our adherence to the game plan and the buy in from the players.”

“We are a new group, and we are still learning the game plan and the structures, and that is going to build as the season goes on.”

Southport’s first game after the bye is against Wilston Grange in Brisbane on the 23rd of April.

Southport have been defeated by 45 points to Maroochydore on Saturday Afternoon.

The injury plagued Sharks showed plenty of heart in the 10.10 (70) to 4.1 (25) defeat, winning the last quarter, which impressed their coach Mal Smith.

Smith said after the game, “They have hearts like Phar Lap and the fourth quarter shows that. We didn’t get the result, but you cannot fault the girls. They gave it everything.”

Coming off a win last week the team had belief that they could win, despite having over 15 girls on the injury list.

Southport were able to get plenty of football inside 50, however they couldn’t capitalise on their opportunities. Maroochydore on the other hand did.

Maroochydore started all guns blazing as they kicked four goals to zero in the opening quarter.

The second quarter was much more even as both sides kicked two goals each. The third quarter was not so even as the Roos utilised the wind extending the 28 point half time lead to 47 points at three quarter time.

There was plenty to like about the Sharks last quarter as they finished the game strongly.

Smith said, “we do take great confidence from the last quarter, because we could have let them just run all over the top of us, but that is not the Southport way.

“The Southport way is to fight it out and that’s what we did. So, I actually come away from the game really proud of the group.”

Taylor Gregory (3 goals) and Zoe Haines (1 goals) were the best for the Sharks, not only for kicking goals but for their work rate and ability to get the ball moving forward all over the ground.

The Sharks have the Easter break this week, before taking on Wilston Grange in Brisbane on the 23rd of April.