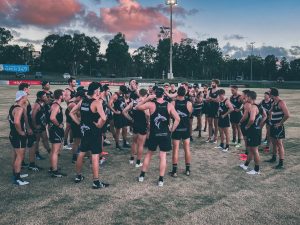 The Southport Sharks VFL/East-Coast competition side has returned to training following a three-week break over the Christmas and New Year period.

The boys were straight back into it with a 2km time trial at Griffith University. Brad Scheer, who won the pre-Christmas 2km time trial, was victorious again.

Dawson, who played nine AFL games for the Suns, will bring a lot of excitement to the club this year and is one of five new Sharks recruits who have played in the AFL.

Head coach Steve Daniel is very excited to have Dawson on board, and he is enjoying coaching him again, after coaching Jacob when Steve was the NEAFL coach at the Suns.

Daniel said, “Dawson is just someone who loves to learn. He does everything you ask him to do, and he has a team-first attitude. He has a great work ethic, and he also has great character.”

Jesse Joyce also comes to the Sharks from the Suns and will be another substantial addition with his 64 games experience at AFL level.

“Jesse is another one of great character and has real leadership potential. He played quite a bit as a medium defender at the SUNS. I’d like to see him go through the midfield. He has an exceptional skill level, and his decision making is elite,” the coach said.

Lukas Webb joins the club with 24-games of AFL experience at the Western Bulldogs and 58- games in the VFL for Footscray and was meant to play for the Northern Blues last year before the cancellation of the VFL.

Steve Daniel said Lukas Webb is going to be a terrific player for the club.

“He is a terrific person and fits the mould of a player we are looking for at the Sharks. He is a talented footballer, and we are fortunate that he chose to come to Southport.”

Billy Gowers, son of Hawthorn premiership player Andrew Gowers, was very high on the list of players that Daniel wanted to bring into the club, and he is ecstatic that he has signed.

Daniel said, “We really wanted to try and get Billy. Not only was he high on our list, but he was also high on everyone’s list. We are privileged to have landed a player like that. He is just going to be so good for us in the midfield, and also when he pushes forward.”

Brad Lynch played nine games at the Western Bulldogs across the half-back and will offer a lot of pace and skill.

“Lynch is going to be great for us. His experience in an AFL system and his talent are going to be really beneficial, and I am delighted that he has decided to play for us as well,” Daniel said.

Overall, Daniel is pleased with the club’s list, and he said the ability to keep the majority of the players at the club was the most pleasing thing.

Now that the squad is back training, the focus is to ensure that the players are as fit and ready as possible for the season ahead.

For the 2018 NEAFL Premiership coach, Daniel believes the most important thing is for the players to be having fun and to enjoy coming to training.

He said, “Making training fun has always been the number one for me, because if you are enjoying something, and you are having fun doing it, normally you get the best out of it.”

“As coaches, we want the boys to be as fit as possible come to the practice games. So, if we can get the boys having fun, then we will get that result.”

Saturday sessions, which have taken place at several locations across the Gold Coast, are one way the coaches have tried to make the pre-season fun.

These sessions have included: the annual Budgy Smuggler run for men’s mental health at Burleigh Hill, beach sessions at Kurrawa Beach and a boxing session with former world kickboxing champion – Paul Briggs, at his gym.

Daniel knows it will be a big step up transitioning from the NEAFL to the VFL, but he is excited by the challenge and can’t wait to get stuck in.

“The new competition is exciting for everyone. Playing in the VFL/East-Coast League will be a completely different challenge to playing in the NEAFL. At the end of the day, though, we are no different from the other 21 teams. Each team will have challenges they have never faced before. Who knows what is going to happen? But we are excited to be a part of it,” he said.

The club is still awaiting the 2021 fixture and the confirmation of practice matches and will provide that information on the club website and social media platforms when it becomes available.