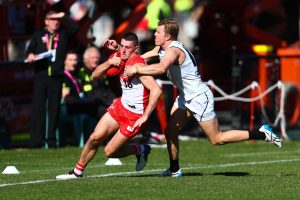 Southport is on top of the VFL ladder after defeating the Sydney Swans by 15-points in a thrilling Saturday Morning clash at Tramway Oval in Sydney.

The last quarter surge started with a Brayden Crossley goal to reduce the margin to ten points, five minutes into the quarter and then it was game on.

The Sharks went on to kick the following two goals and found themselves in front twelve minutes into the final term.

Sydney was not going to lay down, though, and moments later, they kicked a goal to take back the lead.

After some tense passages of play, Southport responded with Mitch Johnson kicking the Sharks back into the lead.

After the game Sharks coach, Steve Daniel said, “It was a terrific win and such a confidence booster.”

“It’s been an interesting couple of weeks for everyone, so to get back on the field and win like that was great. We’ve got some things to work on, but at the end of the day, we got four points. So can’t be happier than that!”

Matt Gahan played well down back, and Tom Fields played a pivotal role up forward.

Michael Manteit and Lukas Webb played well across the wing and in the middle.

Southport, one of only four sides to play this weekend in the VFL due to the Covid lockdown in Melbourne, has the bye next week.