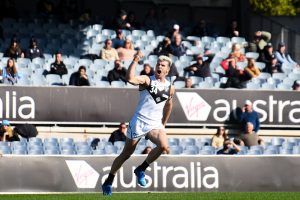 Southport have started their inaugural season in the VFL with a win defeating Carlton’s Reserves by one point in a thriller at Ikon Park on Saturday afternoon.

The Sharks had drawn level a few minutes earlier, but a couple of Carlton steadiers late in the last quarter made Southport’s chance of coming back from a 25-point deficit at three-quarter time look too hard.

However, two centre clearances in a row were enough for the Sharks to kick a behind, and two goals to win the game.

When Lukas Webb kicked the winning goal, it was the first time the Sharks were in the lead since Mike Manteit kicked the first goal of the game.

For Steve Daniel – Southport’s VFL Coach, it was very special to see his side come from behind and win in their first game in the VFL after the NEAFL was disbanded last year.

Daniel said after the match, “It was incredible to see the boys dig deep in the last quarter when our backs were against the wall, we were away from home and in a new competition. Incredible!”

The Sharks Ruckmen – Fraser Thurlow (2 goals) and Brayden Crossley also played a pivotal in the Sharks victory dominating the hit-outs 73 to 19.

Stocker was Carlton’s stand out with 38 disposals and former Collingwood and Adelaide player Ben Crocker was also damaging with 2 goals.

Carlton looked very good in their first game as a standalone VFL in 19-year.

The Blues took advantage of some poor skill error turnovers from the Sharks defence and took a promising 26-point lead into quarter-time.

Carlton’s lead got to as big as 31-points, late in the third quarter, before the Sharks mounted a comeback for the ages.

Daniel put his side’s slow start to the players being a bit rusty in their first game of the year.

“We’ve only played one practice match, compared to Carlton who has played five, so we were a bit concerned coming in we weren’t going to be match fit.”

“In the end though, it was our skills early which almost cost us which is probably the result of not playing enough practice games. Luckily, we were able to rectify it as the game went on. “

Attention for Steve Daniel and his boys now heads to the local derby against Aspley next week at the Southport Shark’s home, Fankhauser Reserve.

Daniel said, “This win against Carlton means a lot for the group. However, we know we have it to back it up next week against Aspley who also won this week, in front of our home crowd.”