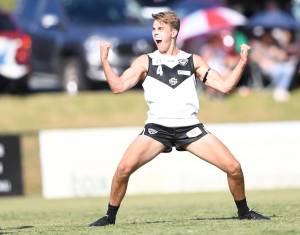 Southport have won their first game at Fankhauser Reserve in the VFL defeating local rivals Aspley by 14-points on Saturday Afternoon.

The Hornets were able to cut a 30-point Sharks lead early in the fourth quarter to just 5-points with less than 10-minutes to go.

Former Bond University player Rhys King kicked the steadier though, to the keep the visitors at bay, and ensure the Sharks remained undefeatedin their inaugural VFL season.

Aftersix goals last week, Gowers leads the VFL Goalkicking by one over Aspley’s Matt Hammelmannwho kicked six for the visitors.

Former Gold Coast Sun’s players Jacob Dawson (34 disposals) and Jesse Joyce, were best on ground for the Sharks, providing some quality service to their forwards.

One of the highlights of the day was seeing Ryan Gilmore kick a goal on debut for the Sharks late in the first quarter.

Adding to the win, Southport were also celebrating the 60-year anniversary of the club’s maiden premiership in their first year of existence in 1961.

Daniel said after the game, “this was such an important day for the club –ANZAC Day, first VFL game at home, 60-year celebrations, the local Queensland Derby and we got the job done. You have to be happy with that.”