Sharks right at home in the wet | Shark Tales Round 13 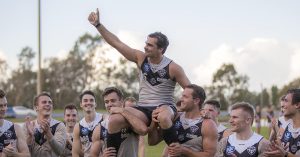 The Southport Sharks season is back on track after a gritty win against the NT Thunder in atrocious conditions at Fankhauser Reserve on Saturday.

Trent Stubbs got us off to a flying start with a goal at the two minute mark before NT were able to answer five minutes later with a classy soccer goal to Kieran Delahunty. Midway through the term, Fankhauser Reserve was hit with a monsoon but it didn’t seem to worry Josh Williams who marked on 50, sold some candy and goaled which set up an eight point quarter time lead.

Andrew Boston, playing in his 100th NEAFL Game, opened the scoring in second term with a nice goal on the left, but it was then goal for goal throughout the quarter, with Sharks small forward Jack Mentha adding two goals for the quarter to extend the half time lead out to 17 points.

The third quarter was almost a carbon copy of the second as both sides traded goals. Mitch Johnson goaled after a great pass from Boston and Matt Doran converted after some good lead up work by Jamieson Shea. Josh Williams’ running power saved a certain NT goal late in the quarter as he beat three opponents to the footy. The lead was 20 points at three quarter time but the result was still in the balance.

The last quarter was an absolute slog as both sides threw everything into the contest. The goal scoring completely dried up and both teams could only add a combined three points to the scoreboard in 28 minutes of footy. A late free kick and 50 metre penalty gifted the Thunder a goal but it was too little too late as the Sharks were able to hang on and win by 15 points.