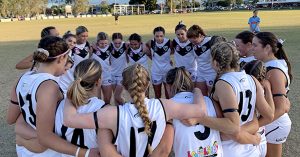 In their maiden QFAW Division 1 season, the inaugural Southport Sharks women’s side has finished on top of the ladder.

Led by co-captains Hannah Davies and Ellie O’Brien, the team finished with seven wins from eight games and an incredible percentage of 477.46%. The position solidifies themselves as a force to be reckoned with in the finals.

Coach Ryan Davis is delighted with the outcome “We worked hard all season, particularly with regards to our defensive system, keeping our opposition scoring to a minimum.”

Football Manager Jarrod Field commends the coach Ryan Davis, board and sponsors “It’s been a big effort to get this result, particularly during COVID-19 restrictions. We’ve had the support of the board since the idea of a women’s side was first conceptualised. Our inaugural sponsors, including Kool Kids Training College, Bidfood, Lexus Southport, Zone Sports, All Sports Physiotherapy and Coast Orthopaedics have been a great support. The team, coaching staff and medical staff have done a great job.”

The Southport Sharks women’s team will play their first finals game on Saturday 19 September at Fankhauser Reserve at 12pm.