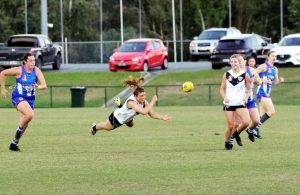 The Southport QFAW side extended their winning streak to nine after a strong second half against the Robina Roos on Saturday.

Windy conditions greeted the teams at Fankhauser Reserve and scoring proved difficult in the first half. Hannah Davies goaled early in the game to set up a four point lead at quarter time, but Robina regained the ascendency during the second term, and only a Zali Cheffers mark and goal regained the lead just before half time.

Coach Ryan Davis told the girls they needed to lift in no uncertain terms at half time and the response was exactly what was required. Zoe Haines duly kicked the goal of the year to date and after Zali Cheffers added her second, the lead had been extended to 20 points at three quarter time.

The flood gates then opened in the final term as Zali Cheffers added her third and Elli-Jay Beck, Charlee Bone and Lily McDonald all added majors to see the Sharks run out winners by 46 points.