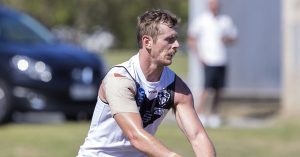 Southport have tasted defeat for the first time in season 2019 after being outclassed by a GWS Giants team boasting 19 listed AFL Players.

Haydn Kiel resumed his NEAFL career after a two year absence and former Southport junior Anthony Djurovitch was on debut at Giants Stadium in Sydney. After a solitary point was scored in the first 10 minutes of the game, first quarter specialist Lee Dale once again kicked our first major. The Giants then capitalised on some poor turnovers and booted the next three goals to go into the quarter time break with a 15 point lead.

GWS goaled within 30 seconds at the start of the second quarter and the signs were not positive from the Sharks. GWS then scored some easy goals until Kiel finally got us on the board. Hall then followed with another goal and the margin was back to 24 points in favour of the Giants. A melee broke out on the half time siren as the boys refused to be intimidated by the Giants.

The third term was all GWS as their lead was out to 52 points at one stage before a late Mitch Johnson soccer goal had the margin at 46 at three quarter time. Coach Steve Daniel implored the boys to win the last quarter in what had been a tough day for all.

The Sharks refused to lie down in the final term and despite losing courageous little man Dylan Fyfe with a nasty gash to his forehead, Timakoi Bowie goaled and Mitch Johnson added two more in junk time which kept the final margin under 50 points.

While a 48 point loss is never ideal, we did show some courage against a quality side and managed to hang onto second spot on the ladder.