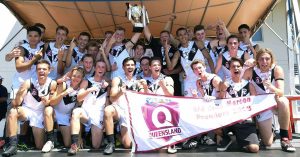 Southport Sharks is located close to Griffith University. We play in the QFA Maroon competition aligned with Div 1. We play against Maroochydore, Noosa, Caloundra, Coorparoo, Mayne, Western Districts & Aspley. You will get to play in at least eight home games as a curtain raiser to our Sharks NEAFL team improving your chance of a high-performance pathway at Sharks. Each year, players from our Colts team will have the opportunity to attend pre-season training with our Sharks NEAFL team for elite experience and a chance to be listed.

Our players will also have the opportunity to enrol in the Southport Sharks Academy from late September through to late November with Level 3 AFL Coaches.

If you are interested in joining us and want to be a part of our trademark culture, email registrar@southportjafc.com.au or phone 0437 932 339. For more information, please visit the Colts website.

Registrations are closing by the end of February 2019, so don’t miss out!