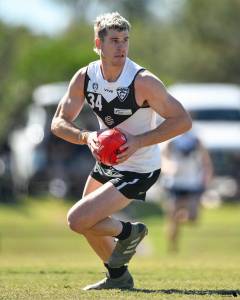 Last night, the AFL announced an update to the 2021 VFL Premiership Season in a media statement.

The statement read, “As a result of the evolving COVID-19 situation across the country and previous interruptions to scheduled games, the 2021 VFL home-and-away season will move to a match ratio system to determine ladder positions ahead of the 2021 VFL Finals Series starting on Saturday, August 28.

The finals will retain the present top eight systems should they be able to start on the weekend of August 28, but the AFL has put a contingency in place should there be any further delays.

The AFL is planning for all 22 clubs to play the final round of the 2021 VFL home-and-away season on Saturday August 21 to celebrate a year like no other. Dates, times and venues to be confirmed following the release of the Round 23 AFL Fixture.

If football cannot be played on August 21, the AFL will move straight into the finals with the top eight sides as they currently sit on the match ratio ladder.

The AFL is working with us to explore all possible arrangements to have our Final’s matches played.

VFL Finals Games will continue to be shown with broadcast partners the Seven Network, Foxtel and Kayo.

The full AFL Media statement can be read here