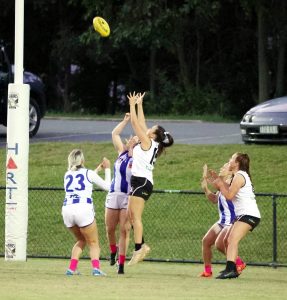 Zali Cheffersmanaged a season’s best haul of three goals as the Sharks dominated from the opening bounce.

Elli-Jay Beck continued on her good from last week kicking the first goal of the game but this week was ably assisted by Maddy Watt, Charlee Bone and Chefferswho all managed multiple goals.

Emily Stewart is back in great form and led an a classy midfield group who repeatedly drove the ball into our forward 50.

Former Sharks Junior Zoe Haines had her best game since her return, dominating down back and repelling many of the Vultures inside 50’s.

Coach Ryan Davis was very happy with a four quarter performance that sees the Sharks with a 5-1 win loss record heading to the mid-season bye.

A solid eight week block awaits the girls after the bye including our only clash with top side Surfers and a re-match with Morningside. These games will define our season heading towards finals.