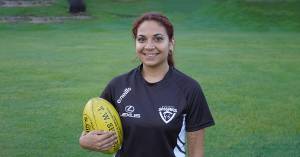 It was another successful year for our women’s team. We came away with back-to-back premierships defeating Surfers Paradise in the Grand Final by 10-points. Unfortunately, though, I did not play in the Grand Final due to injury. As someone who has played at the Sharks for the last two years, I want to give you an insight into the year that was and why I love playing footy at the Southport Sharks, and why I’m looking forward to making the jump to QAFLW in 2022.

The year started with a very challenging, and rigorous pre-season in December 2021. We had several new players at the Sharks this year, so it was important for us to bond over the pre-season. The pre-season camp on North Stradbroke Island was pivotal in this bonding exercise. I thought pre-season camp was just going to be fun, which it was but physically and mentally it was a challenge. They put us through the wringer.  I remember thinking 5km into a 10km beach run, with fitness stops on the way, this is not going to be an easy year. On the last day of the camp, they made us all stand in the ocean and hold a rope over our heads. It was tough and we were all struggling. My shoulders were trembling. However, standing there with my teammates gave me comfort, and this experience surprisingly became really special. It helped me know that I was able to trust and have confidence in my new teammates.

We knew that 2021 was going to be tougher than 2020 to win the premiership and that we had to rely on each other more and work harder. This was proven in Round 1. We lost to Morningside by a point at home. We were disappointed, but it meant we were even more determined, desperate and committed. In Round 2, we played Burleigh. It was a great win! We had great energy which was helped by having a couple of debutants. After a tough loss in Round 1, it was exactly what I needed to reinvigorate my season and my passion for the game. 2020 was my first year of AFL, so I was still learning the craft, so a win like that reminded me why I love the game.

As the season wore on, as a group we grew closer. From Ice Baths to hangouts, to hour-long car park debriefs, we were a tight-knit unit. A special unit. Every day I just couldn’t wait to go to training and see the girls, but also work hard. Heading into an important clash against Surfers Paradise, who ended up being the team we beat in the Grand Final, in Round 12, we were nervous. We had been undefeated since our Round 1 loss against Morningside but playing Surfers at their home ground was going to be a challenge. We knew though if we played the way we wanted to play, we would get the job done. And we did. We won by 9-points. It was a bittersweet feeling for me though, as this is when I got a stress fracture in my foot. With around a minute to go in the last quarter, I was tackled powerfully to the ground. My right foot felt the full impact, resulting in a stress fracture and a ruptured lis-franc ligament.

A week later Luci Van joined me on the season-ending injury list, rupturing her ACL. Rachel Watt also broke her finger in that game, meaning our depth was getting tested.

Adding to the challenge, covid cases began to appear in Queensland, which means the season was brought to halt.

Thankfully, due to the work of the Queensland Government and AFL Queensland, our season was able to resume. It was a confusing and challenging time for the team, but we made the most of it. The group chat messages were coming thick and fast from girls sending sweaty selfie photos after the big runs, and workouts they completed. The bond grew over this time, which really helped come finals.

Our first final was against Burleigh at home. If we won, we were straight in the Grand Final, and if we lost we were out.

It wasn’t our best start. But after regrouping at half-time we came out hungry. We played much better in the second half securing the win we needed to send us into the Grand Final.

Grand Final week was a roller-coaster of emotions. We had some injured players, so there was curiosity about who was going to make the team. Unfortunately, there are always players that are going to miss which was a hard part of the week, but in the end, the team that was picked gave us the best chance to win. Lily McDonald and Rachel Watt both played in the Grand Final with broken fingers, and both did a fantastic job in helping us win the game.

It was a great win by the girls, and I am so proud of what we have achieved at the Sharks in the last two years. After two seasons, being promoted to the QAFLW is so exciting. 2021 had its ups and downs, but I can’t wait for 2022 and the challenge of playing QAFLW.

For me personally, my recovery is going well and I’m excited for next year.