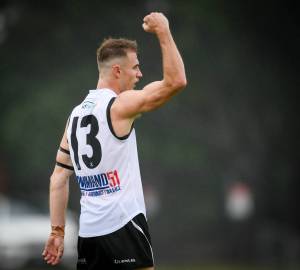 It has been an emotional week for the Southport Sharks, with the club losing their long serving president Dr Alan MacKenzie during the week.

The club was also wearing black armbands for past player Graham Mcleod who also recently passed away.

Poor kicking in front of goal in the first quarter by the Sharks meant the Giants led by seven points at quarter time.

19-year-old Max Pescud was terrific for the Sharks, and his two goals in the second quarter were exactly what the Sharks needed.

Southport kicked four goals to two in the second quarter to lead by four points at half time.

The other goal kicker in the second quarter was debutant Tom Reeves, who kicked a quality snap goal for his first VFL goal for the Sharks.

The third quarter was a shootout. The Giants kicked the first goal of the quarter to take back the lead.

Jay Lockhart then kicked a magical goal from the pocket to put the Sharks back in front.

The Giants were not going to go away, though, kicking three of the last four goals of the quarter to lead by two points at three quarter time.

Southport was desperate to finish the game off well and win the game for Doc.

Early in the last quarter, Jay Lockhart kicked another spectacular goal to put the Sharks back in front.

Rhys King kicked a clutch goal to extend the lead to 10 points, and then Lockhart kicked his third goal to seal victory.

Jesse Joyce and Billy Gowers then kicked two late goals to extend the final margin on a sad but special day for the Southport Sharks Football Club.

Southport Head Coach Steve Daniel said after the game, “It is tragic to think Doc is no longer with us.”

“We really wanted to go out there and play for him, and credit to the players I think they did especially in that last quarter.”

After the game all the players, support staff and past players in attendance joined arms and sang “Good Old Southport Forever” in tribute for the significant impact that Doc has had for not only the Southport Sharks but Queensland Football.

In the context of the season, it was an important win for Southport. The Giants were undefeated, and after losing to Casey the week before it was important for the Sharks to respond.

“The Giants are a quality outfit, and we knew it would be a tough challenge. They play a good, contested brand of football and can spread quickly because they move the ball so well.”

“After Casey was able to jump us last week, we focused on not letting that happen again, and despite not converting some of our opportunities to goals I was pleased with our first quarter.”

“With how tough of a game it was, especially with the weather conditions, I am so proud of the boys that they were able to grind the game out to the end and get the four points.”

Max Pescud and Jay Lockhart were also amongst the best with three goals each.

Rhys Clark was terrific down back, as was Fraser Thurlow (34 hit outs) in the ruck.

This week the Southport Sharks travel down to Melbourne to take on Port Melbourne.