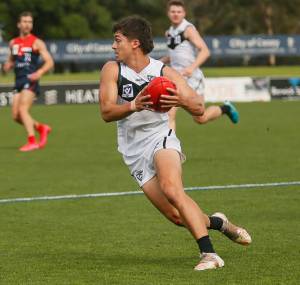 The Southport Sharks were unable to beat the top of the ladder Casey Demons on Sunday afternoon, going down by 30 points at Casey Fields.

The lead extended to 47 points before the Sharks finally kicked a goal halfway through the second quarter.

The Sharks then got on a run, kicking five goals in a row, and were able to get the margin down to 19 points, three minutes into the third quarter.

Casey was able to steady, though, and ensured the Sharks weren’t able to come back like they did against Footscray.

After the game, Southport Coach Steve Daniel said, “Our first quarter was disappointing. You can’t give a quality outfit like Casey a head start like that and expect to win.”

Daniel took plenty of positives and learnings out of the contest, though.

“We want to test ourselves against the best, and Casey are the best team in the competition at the moment.”

“Other than the first quarter, I was impressed with our effort. Casey is a quality outfit, and we were able to match it with them for three quarters.

“We will learn from the first quarter and our mistakes, but we can take great confidence from the rest of the game.”

Jay Lockhart played well down back for the Sharks against his old club.

The Sharks also won the clearances, however, Casey had 13 more inside 50s.

This Sunday, Southport hosts second-placed GWS Giants in an important game at Fankhauser Reserve at 12:05 pm.

Daniel said, “It’s going to be another big game. GWS are a quality outfit, but we are excited by the challenge. “