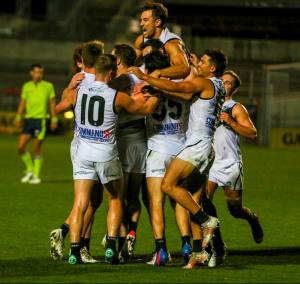 Tom Fields was the hero at Whitten Oval on Saturday Night.

With less than a minute to go, he picked up the ball 50 metres out from goal, ran through two Footscray players and kicked the winning goal for the Sharks from about 30 metres out on a 45-degree angle.

Southport trailed by 15 points at three quarter time, and Footscray was well in truly in control.

The message from Daniel at the huddle was simple, though, take the game on, and that is exactly what the Sharks did.

“When you are trailing at three quarter time and start kicking a couple of goals, the opposition can panic, and that’s where you can win.

“So, the plan in the last quarter was to take risks, play on at all times and move the ball quickly, and make Footscray panic.”

Footscray actually kicked the first goal of the quarter which extended the margin to 21 points, one minute into the last quarter.

Five minutes later, the Dogs kicked another to lead by 20 points. It looked doubtful that the Sharks would win at this stage, but they didn’t give up.

Zac Foot kicked the next goal for the Sharks. The margin was cut to 13 points halfway through the last quarter.

Against his old side, Billy Gowers kicked the next goal for Southport three minutes later. The margin was now 8 points. Game On!

The Dogs steadied straight away, but then Thurlow kicked one of the most amazing Ruckman’s goals you will ever see to make the margin less than two goals again.

Zac Foot, who was also amongst the Shark’s best, kicked his third for the match twenty-six minutes into the last quarter to bring it back to 1 point before Tom Fields kicked the winner.

It was a memorable victory for the Sharks. On Saturday Morning, Southport’s team flight was cancelled, which meant the 3:05pm start time became a 7:35pm start.

Daniel said, “Of course, the situation was not ideal, but we just had to stay focussed on winning. We are a resilient group, and coming away with the win is special.”

It was far from Southport’s best game, and Daniel is the first to admit that.

“Footscray were terrific. They came and hunted us right from the start. Their pressure was elite, and the intensity that they brought was fantastic.”

“You can’t play good football week in, week out. We did not play our best, but we could still win. That is what good teams do, and that is what we are aiming to be.”

Rhys Clark, also played well down back in his 50th game for the club.

Southport, sitting fourth, with four wins and one loss, has the bye this week.

Their next two games are against Casey (1st) and Giants (2nd), so the bye will be an excellent opportunity for the players to reset ahead of two big games.