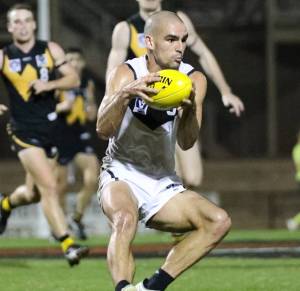 The Southport Sharks have won back-to-back games in the VFL after defeating Werribee at Avalon Airport Oval on Saturday Night by 52 points.

Southport started very well. Daniel Charlesworth who usually plays defence kicked his first goal in the VFL to open the Sharks account one minute in.

Werribee made it into a bit of a shootout until Southport were able to open the flood gates midway through the first quarter.

Scoreboard pressure has been something that Southport Coach Steve Daniel has been harping on about to his players, and he couldn’t have been more pleased with the output from them in the first quarter.

Daniel put the first quarter down to mindset and preparation.

He said, “There are always challenges with playing on the road, so we really wanted to make sure we got our preparation right, and not let anything distract us from getting the four points.”

Daniel believing, “I think the first quarter showed that we got those two things right this week.”

In the second quarter, Tom Fields in his 50th state league game, followed up a magnificent goal he kicked in the first quarter with two goals in a minute.

Southport led by 43 points at Half Time. Billy Gowers extended the lead 25 seconds into the third quarter, with a nice snap goal.

Southport kicked only one more goal in the third quarter, with the Tigers winning the term by 3 points.

The Sharks finished the game strongly though, with the only negative being an injury to Seb Tape.

Very happy with the result Daniel said after the game, “Werribee are a quality outfit. They are well coached, and they are great at the contest.”

“We knew it was going to be a challenge, so to come away with the win is outstanding.”

There were a lot of contributors in the victory.

Boyd Woodcock, Jacob Dawson, Jesse Joyce and Jay Lockhart are proving to be quite a dangerous quartet in the middle of the ground.

On the wing Josh Williams continued his great form with his tackle pressure, run and ability to kick goals.

In defence, it was another great team display for the Sharks, but Aiden Fyfe was impressed with his poise on the half backline.

This week is going to be a big test for Southport as they host a blockbuster Easter Thursday game against Geelong at Fankhauser Reserve.

It is a game you don’t want to miss, with FREE entry. The game starts at 7:05pm. Click here for Match Day Info.

Click here to watch the live stream. All VFL games will be live-streamed in 2022.