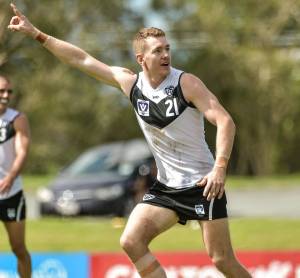 The Southport Sharks have responded well after a disappointing performance against Richmond to defeat Williamstown by 57 points on Saturday afternoon.

After the game, Head Coach Steve Daniel said that the most amazing thing about Townsend’s performance was that he was injured.

Daniel revealed, “He almost missed with a cork, but said he didn’t want to let the boys down so wanted to push through.”

“So, credit to him and his resilience. We love having him out there not just because he kicks goals, but he is a great leader for us.”

Townsend’s third quarter was unbelievable, kicking six goals, the most in a VFL quarter of football since 2011.

It was not such a good day for another one of Southport’s goal kickers – Mitch Johnson.

In the second quarter, Johnson came off the ground with a sickening knee injury. It is unknown yet how significant the damage is, as he is still awaiting scan results.

Other than that, it was almost the perfect day for the Sharks as they won all three games in their first ever QAFLW/VFL triple header.

Daniel exclaimed, “we want to make Fankhauser Reserve a fortress and to win our first game certainly helps us do that.”

Last week, Daniel mentioned how he thought his side overused the ball and turned over and missed key shots in front of goal against Richmond.

This week, he was pleased and satisfied with how his side bounced back.

He said, “The thing we learnt most from the Richmond game is we want to make the most of our chances, and I think we did that. We put Williamstown under a lot of scoreboard pressure, especially early in the third quarter.”

Southport kicked ten goals to two in the premiership quarter, which put to bed any chance the Seagulls had of winning.

Williamstown came into the halftime break with momentum after cutting the 26 point quarter time lead to 17 points.

Southport dominated the inside 50s, though, which is an area they were disappointing against Richmond.

New recruits – Jacob Heron, Max Spencer and Max Pescud were amongst the best for the Sharks, which is an excellent sign for the club.

Although it was good to win, Daniel’s focus is now on getting another win against Werribee this weekend.

Southport will play on Saturday Night at Werribee at Avalon Airport Park at 7:05pm. Click here to watch the live stream. All VFL games will be live-streamed in 2022.