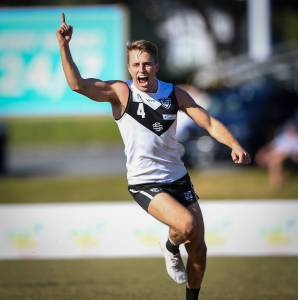 The Southport Sharks have now won their last ten games at Fankhauser Reserve after defeating Frankston by 80 points on Saturday.

“It’s exciting to win our last ten games here. It’s great for our brand and our football club.”

He said, “That was a finals like game. The pressure Frankston brought was elite. I’m so happy we could counter it and have a good win.”

Southport won the Inside 50s by 18, which set up the victory and impressed Daniel.

He said, “We knew to beat Frankston, we had to get a lot more Inside 50s then them because they are fantastic defensively.”

“We set a target to get ten more Inside 50s than them, so to get over and above that was sensational.”

The Sharks conceded the first goal, but from there, they were in control of the scoreboard.

Southport kicked the next eleven goals of the game, which ultimately set up the victory.

It was a proper team performance. Statistically, though, Mike Manteit (28 disposals) and Boyd Woodcock (27 disposals and two goals) were the standouts.

Southport has the bye this week before a challenging game against Box Hill in a fortnight.

Daniel said, “It’s a big game for us and another challenge. We must keep the momentum going as we have been playing some good footy.”

“We will use the bye to recharge our batteries and go again as there is still a large chunk of the season to go.