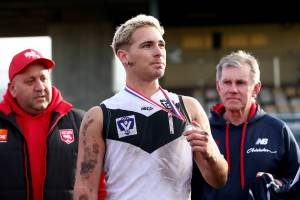 The Southport Sharks have defeated the Northern Bullants by 68 points in Round 13 of the VFL on Sunday at Preston City Oval.

It was a special game for both clubs as they commemorated the life of Alex Aurrichio who tragically passed away in 2020 after a bike accident in Darwin.

Aurrichio made a significant impact at both clubs, so to celebrate his life, a medal named in his honour is awarded to the best player when Southport and Northern Bullants play against each other.

After the match, Woodcock said, “I didn’t have the pleasure of knowing Alex, but I know how much he meant to everyone. I played against him once in the SANFL, and it was unreal to watch his team spirit.”

“We wanted to embody his spirit and bring that into the game, and I’m stoked we were able to do that today.”

Southport won by over ten goals off the back of an excellent second and fourth quarter, but the third quarter was disappointing.

There was a breeze favouring one end, and the Bullants were able to make the most of it in the third quarter kicking four goals to zero.

In the fourth quarter, the Sharks were able to wrestle back control and more than double the three-quarter time lead of 32 points.

The Sharks have now won their last five games and a building momentum nicely for the end of the season.

Matt Gahan played well down back (21 disposals, 14 marks and seven rebounds), and Mike Manteit (25 disposals and nine marks) was good on the wing.

Billy Gowers (four goals and 20 disposals) was electric and led the way in front of goals. Brayden Crossley and Jacob Townsend kicked three goals each.

This week Southport, who remain in second place, play Frankston at Fankhauser Reserve at 12:05pm on Saturday.