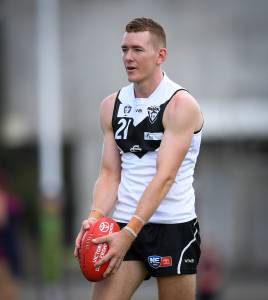 The Southport Sharks will take on the Richmond Tigers Reserves at Punt Road Oval this Sunday at 11:35 AM (local time) for Round 1 of the VFL.

It is the first time the Sharks have travelled to Melbourne since they beat Carlton by a point in Round 1 of the VFL last year.

Southport VFL Coach Steve Daniel said the players and coaches are really looking forward to getting back down to Melbourne.

He said, “We got a taste of playing in Melbourne last year, but unfortunately due to Covid, we were only able to play the one game down there. So, we are itching to get back down there to play, especially against Richmond in front of a big Punt Road crowd.”

The Sharks have played two practice matches in 2022, both against Brisbane. They lost the first game 23 points at Burpengary but won the second game at home by 3 points.

Daniel is not reading too much into either club’s practice match results but walks away content with what he saw from his side’s two hit-outs against Brisbane.

Daniel said, “It has not been the perfect pre-season. It has been interrupted with ground availability, covid and floods.”

“However, the attitude of our players, coaches and staff have been fantastic, and I’m happy with where we are at as a collective heading into Round 1, which has been our focus all pre-season.”

Richmond is still the VFL reigning premiers, despite it being over two years since the 2019 VFL Grand Final was played, with two covid affected seasons.

Southport recruit, Jacob Townsend played in that Grand Final, and is at his third club since then, as he played for Essendon in 2020 and the Gold Coast Suns in 2021.

Daniel is wrapped to have him playing at the Sharks in 2022, and is looking forward to seeing him play against his old club on Sunday.”

“To have an AFL Premiership Player in our team is sensational. He is such a tough, competitive player and his experience is so valuable for our younger players.”

The game will commence at 10:35 AM Queensland Time and can be live streamed on the AFL Live App.

For supporters interested in attending, you can purchase tickets online here. You must purchase a ticket online to attend.