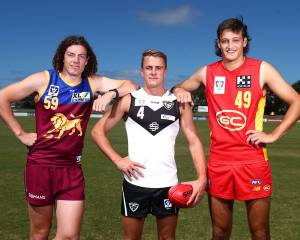 Southport supporters can look forward to all VFL matches being live streamed for free via afl.com.au and the AFL Live Official App in 2022.

AFL Executive General Manager Customer and Commercial, Kylie Rogers, said: “The AFL’s commitment to live streaming the Smithy’s VFL helps to keep hundreds of thousands of passionate fans connected to their favourite teams while taking the competition to broader audiences. “Increased exposure of the competition is a great thing for the clubs and players, as well as fans, families and recruiters who have access and choices when it comes to how they watch VFL footy.“The significant investment into VFL comes off the back of a successful start to the rebel VFLW season which has seen all matches live streamed for the state’s premier women’s state league competition. Our commitment to live streaming every VFL and VFLW match free will continue for both competitions throughout the 2022 season.”

The Southport Sharks VFL campaign begins on Sunday 27 March against the Richmond Tigers at Punt Road at 10:35 AM (QLD time).

For the VFL season fixture and links to watch free live streams of all matches, visit: afl.com.au/stream-vflVFL broadcast partner the Seven Network will show a weekly game plus finals live and free on 7 in Victoria and 7Plus nationally. Fans can catch up from anywhere around the nation on 7plus. In Round One, Seven will broadcast the Collingwood v Box Hill Hawks match at Victoria Park at 11:10 am (QLD Time) on Sunday 27 March.

Click here to read “How to Watch VFL Explainer PDF”