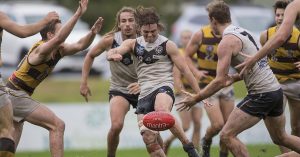 The Aspley Hornets have continued their recent run of good form defeating Southport at Fankhauser Reserve in very heavy conditions on Saturday.

The writing was on the wall very early in the game when Mackenzie Willis was caught in the defensive goal square and Aspley duly converted the free kick one minute into the game. When Jono Freeman outmarked Rhys Clark and goaled 15 minutes in, Aspley had opened up a two goal lead as Southport struggled to hit the scoreboard at all.

Ryan Davis was moved into the midfield at quarter time to try and lift the side. Tom Fields goaled early after a good contested mark but the next 10 minutes was all Aspley as Hampton then Ives both goaled and Aspley were out to an 18 point lead. Fyfe finally answered for Southport after consecutive 50 metre penalties then Davis kicked a great banana goal to reduce the margin to six points at half time.

The third quarter was a disaster for Southport as Jordan Taylor and Matt Doran both left the ground injured and only two behinds were added.

Staring at a 17 point deficit at three quarter time, Mitch Johnson added a goal for the Sharks but then it was all Aspley as they added two more goals to run out convincing 26 point winners.