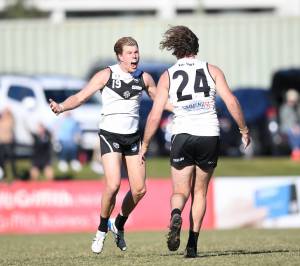 Southport trailed Essendon’s VFL team for the majority of the day on Sunday Afternoon. However, they led when it mattered most. On the final scoreboard.

The Sharks were down by a point, 31 minutes into the last quarter before Mackenzie Willis who was sensational down back all day, took an intercept mark.

He then handballed it which unleashed Manteit to bomb the ball inside 50.

It was a chaos ball with bodies going everywhere before Tom Fields picked up the ball in a flooded forward line and snapped 35 metres out in front of goal.

Bouncing once in the vacant goal square, it went through the big sticks, with a big home crowd cheer to follow, as Southport hit the front by 5 points.

Essendon had one final chance to take back the lead, but it ended in a behind.

More importantly, Southport took home the four points which means they are back on top of the ladder, winning their last seven games.

It was a hard-fought four points as the Bombers 10 listed AFL players, and fill-ins from across Australia including Alex Rance – Richmond premiership player and five-time All-Australian, took it up to Sharks.

Andrew Boston led from the front for Southport with 26 disposals, 10 clearances and 2 goals, and Jacob Dawson collected another 35 disposals in a midfield that won the clearances 44 to 30.

Coach Steve Daniel said after the game, “It was not our best game, and there is a lot to improve on. But I’m so proud of the boy’s ability to grind it out and get the four points. That is something that is super important especially with finals not too far away.”