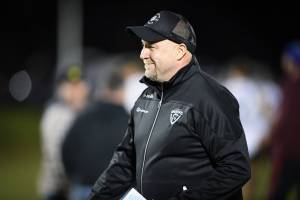 Southport’s inaugural VFL Coach Steve Daniel was already contracted for the 2022 season, but that has now been extended until the end of 2024.

“I’m really excited to have signed on for the next three years,” Daniel said on Tuesday afternoon following the announcement.

“It’s a terrific club with a great culture, and I am extremely grateful to the Southport Sharks, for showing faith in what we are doing here at the moment.”

The club has come a long way since Steve took charge in 2018.

In 2017, the Southport Sharks finished 9th in a ten team NEAFL competition. A year later, they were premiers.

In his second year, the Sharks made the Grand Final, and after a year off due to covid, the side finished second after a shortened home and away season this year, in the Shark’s first year in the VFL.

Southport’s GM of Football – Jarrod Field is proud to be able to extend his contract by a further two years.

Field said, “Steve brings so much to our club and has a proven track record”.

“We trust the direction he is taking our playing group, and that’s ultimately why we were so keen to extend his contract for a further two years”.