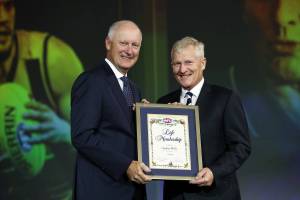 Southport Sharks 1983 Premiership Player – Stephen Wells has been awarded AFL Life Membership for his special service to the game.

We were privileged to have him play for us at the Sharks for one season—1983 – a very significant year for the club.

Wells returned to Geelong in 1984 and started working for the Geelong Cats as a Development Officer. From 1986 to 1990, he was an Assistant Coach for the Under 19s. In 1991 he became the assistant football manager and had a role in recruiting.

Wells is a Life Member of the Geelong Football Club, and in 2019 he was awarded the AFL Coaches Association Neale Daniher Lifetime Achievement Award.

Dare said, “He’s the kind of guy where you’d want your daughter to marry. He is such an incredible person on and off the field.”

“In 1983, he was our centreman. We never had to take him off the field. He had elite endurance, and his skills were incredible.” 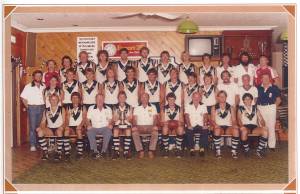 1983 team photo. Steven Wells is fourth from the right in the second row, and Norm Dare is second from the left in the first row.

Dare and Wells had a good relationship in 1983 but it blossomed when Dare was an assistant coach at the Cats from 2001 to 2003.

Dare said, “His eye for talent is incredible. I used to love it when he would come to me and say, have a look at this kid. They were always very underrated, and they turned into premiership players.”

“I’ll never forget when he said come have a look at this kid from South Australia. He was playing Under 18 footy for Glenelg. Steve said it will be a risk taking this guy because he’s never played senior footy, and no one will expect him to go high in the draft. But I like him, and I want to take him at pick 7. The player’s name was Andrew Mackie – an All Australian and three times AFL premiership player.”

Dare said that although he put countless hours at work, he was always a family man and passes his congratulations on to Stephen and his family on a well-deserved and outstanding achievement of AFL Life Membership.

The Southport Sharks join Dare and congratulate Wells fantastic contribution to the game from community to the elite level.