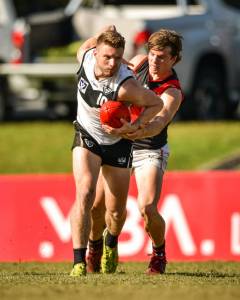 Southport were defeated by two points on Sunday Afternoon against Essendon in an entertaining contest at Fankhauser Reserve.

The Sharks got off to a great start and led by as much as 33 points five minutes into the second quarter, but the Bombers came back.

The Bombers kicked six of the first seven goals in the last quarter to lead by 16 points mid-way through the term.

The Sharks kicked two late goals, to try and get back in front but they fell agonisingly short.

It is the first time the Sharks have lost at home in the VFL. Despite the loss the Sharks still hold second position with three games to go in the home and away season.

After the game, Head Coach Steve Daniel said, “We cannot dwell on it too much. Of course, we are disappointed, but we know how important it is to bounce back against Collingwood this week.”

“So, we will review it, look at what we can do to improve to ensure we don’t find ourselves in a similar position and prepare as best as we can for Collingwood.”

“We started well, but credit to Essendon, they were relentless and didn’t give up. At the end of the day, we just weren’t good enough.”

Mitch Johnson led the way in front of goal with three goals.

Down back, Mackenzie Willis and Ryan Davis were solid.

Southport’s game against Collingwood will take place at Victoria Park on Saturday Morning at 10:35 AM.

You can watch the game live and free by either afl.com.au/stream-vfl or the AFL Live App.