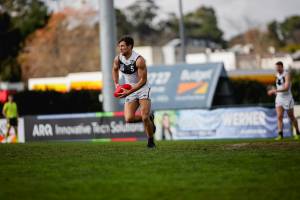 Southport got the ascendancy late in the first quarter and extended their dominance in the second quarter to lead by 30 points at half time.

Box Hill is a quality side and was not going to let the visitors run away with an easy victory.

The Hawks raised the intensity in the third quarter and cut the lead to seventeen points at three quarter time.

Southport had thirteen Inside 50s in the third quarter and only scored one behind.

This did not impress Coach Steve Daniel, who asked his players at three quarter time to improve their work rate and ability to win the contest in the last quarter.

The last quarter was intense. Jacob Townsend, Rhys King and Max Pescud kicked critical goals for the Sharks in the fourth quarter. The final score read 10.14 (74) to 8.11 (59).

Jacob Dawson was the leading possession getter with 33 possessions and seven clearances. Boyd Woodcock had 25 disposals, five clearances and a goal.

Down back, Seb Tape was sensational with 18 disposals, 10 marks and six tackles. Max Spencer was also excellent.

After the game, Daniel said, “It was a tough finals like game. Credit to Box Hill, they were terrific, especially in the second half.”

“We were disappointed with our third quarter, we let them back into the contest, but I’m proud that we were able to hold on.”

“The belief in the group is building every week and wins like that certainly help. However, we know how hard every game is in the VFL.”

“We are just focusing on preparing well and getting our mindset right. We have another big challenge this week against Sydney on Friday night, which I know everyone is looking forward to.”

The game against the Swans starts at 7:05 pm at Fankhauser Reserve. Click here for more match day info.