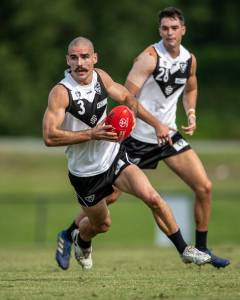 The Southport Sharks are back on the winner’s list after defeating North Melbourne’s VFL team by 107-points at Fankhauser Reserve on Saturday afternoon.

In the midfield, Jacob Dawson was unstoppable with his clearance work finishing with 38-disposals and five tackles.

Jesse Joyce and Lukas Webb also showed their class, as did Mike Manteit, who has been winning a lot of ball in the last few weeks.

The club also had two debutant’s – Michael Selsby and Matt Gahan, who both played their role in the victory.

That lead grew as the Sharks continued to dominate the clearances.

For the third week in a row, the Sharks were able to get the ball inside fifty more than their opposition, winning the Inside 50 count by 46.

The most pleasing thing for Sharks VFL Coach Steve Daniel, though, was that his players made the most of their inside 50s, unlike the last two weeks.

Daniel said after the match, “We obviously talked about it a lot this week and that we wanted to reward our hard work on the scoreboard. So, to see an improvement in that area is pleasing, and long may it continue.”

It was a confidence-boosting win for the Sharks, who have now won three of the four games, and are undefeated at home.

“We knew there was a great opportunity to win this week, and for the players to respond like that is just terrific,” Daniel said.

Attention for Southport now heads to the second edition of the VFL Queensland Derby between Aspley and Southport.

Knowing how tough it is to beat Aspley at Graham Road, Daniel said, “It’s a massive game for us, and we look forward to it!”