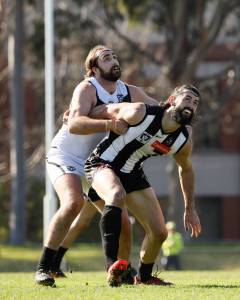 Collingwood proved too good for the Southport Sharks on Saturday Morning at Victoria Park.

The Magpies were much cleaner in possession than the Sharks and made the most of their opportunities in the 13.10 (88) to 6.14 (50) victory.

After the game Southport Coach Steve Daniel said, “Our conversion in front of goal did not help us but at the end of the day Collingwood were just too good.”

Southport have the bye next week, and Daniel admits it has come at a good time.

“It will be good to reset, recover and review ahead of our last two home and away games”.

Most of the damage was done in the second and third quarter, when Collingwood kicked six goals to one.

Southport won Inside 50s, contested possessions and clearances, but Collingwood were a lot more efficient with their ball use.

Brayden Crossley was terrific in the ruck against Brody Grundy, and Kwaby Boakye was excellent down back.

After the bye, Southport play Gold Coast in the Coast Clash on Saturday August 13, 12:35pm at Metricon Stadium.

Click here to keep up to date with Southport Sharks Football News.