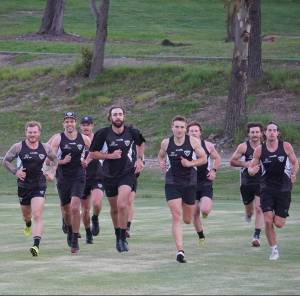 The Southport Sharks Men’s team has just completed their first week of pre-season, and everyone is up and about according to the coach Steve Daniel.

“After an interrupted last two seasons, we are looking forward to 2022, and are really excited about the year ahead.”

The Southport Sharks men’s team has only played 10 games in the last two years, with covid-19 restrictions impacting the 2020 NEAFL and 2021 VFL season.

2021 proved though, that the club is adaptable and is up to the challenge of playing VFL.

Southport won nine of their ten games in the covid interrupted 2021 VFL season, facing many challenges.

“It was a solid first season and am really proud of how we handled what was a challenging year,” Daniel said.

“Of course, we would’ve liked to have played a full season but there were plenty of promising signs from 2021, but also things we want to improve.”

The Sharks were able to retain 24 of their list and have recruited eight new players so far.

“Our list is in a great spot. To retain as many of our current players as possible was a goal of ours and I think we were able to do that. Then, to add the calibre of players that we have, is exciting for everyone involved,” Daniel said.