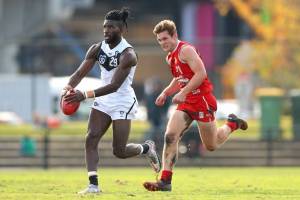 The AFL has confirmed the fixture for Rounds 19 to 21 of the Smithy’s Victorian Football League (VFL) 2022 season.

In Round 19, the Southport Sharks will play Collingwood at Victoria Park for their last trip to Melbourne for the home and away season.

In Round 21 the Southport Sharks will take on the Gold Coast Suns in the Coast Clash will take place at Metricon Stadium.

Fixture details for the final round of the Smithy’s VFL home-and-away season, Round 22, will be confirmed and advised after the fixture for Round 23 of the Toyota AFL Premiership Season is released. For the full fixture, please go to www.afl.com.au/vfl/fixture.All matches in the 2022 Smithy’s VFL season will be live streamed via the AFL website (afl.com.au) and AFL Live Official App. Smithy’s VFL broadcast partner, the Seven Network, will continue to show one weekly game live and free on Channel Seven in Victoria and on 7Plus nationally.