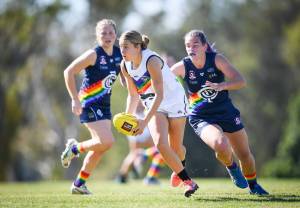 The Southport Sharks QAFLW team has secured a finals berth in their first season in the competition after defeating Coorparoo by 14 points on Saturday.

The Sharks wore special jumpers as part of the QAFLW’s Pride Round, which saw all games in Round 16 played at Leyshon Park.

It was an important game for the Sharks because they could miss out on the finals if they lost.

Coorparoo was also playing for their season, so the stakes were high.

The Sharks had plenty of Inside50s in the first quarter but couldn’t capitalise on the scoreboard.

Neither team could kick a goal in the first quarter and at the first change, Southport led four points to one.

Selina Priest kicked the game’s first goal two minutes into the second quarter to give the Sharks a nine-point lead.

That was the only goal of the second quarter. Caitlin Miller extended the Sharks’ lead halfway through the third quarter before Coorparoo kicked a soccer goal late in the third to Coorparoo in the game.

The margin at three quarter time was eight points, and it remained that way until Brianna McFarlane kicked a goal with five minutes left in the match.

Caitlin Miller put the game out of reach of Coorparoo when she kicked her second a minute later.

Kaylee Kimber was exceptional for the Sharks. Her run and long kick to set up Bree McFarlane for a goal in the last quarter were incredible.

Maddy Watt was solid in the midfield, and Leigh Alder was the general down back.

The Sharks will now play Maroochydore in an Elimination Final this week at Yeronga.

The Southport Sharks QAFLW Reserves have finished second on the ladder after defeating Coorparoo by 14 points in the final home and away game on Saturday.

The Sharks wore special jumpers as part of the QAFLW’s Pride Round, which saw all games in Round 16 played at Leyshon Park.

It was even at halftime, and at three quarter time the Sharks led by 2.

In the last quarter the Sharks were going against a relatively strong breeze, but they managed to kick two goals and keep Coorparoo scoreless to win 3.4 (22) to 1.2 (8).

It was a tight and tense game, but the Sharks held their nerve, which is a great sign heading into finals.

Zali Cheffers was terrific in the midfield, and Ashlee Flick played one of her year’s best games.

Southport lost two of their first three games of the season but they have been highly resilient all year and find themselves second at the completion of the home and away season.

They have beaten every team in the competition except for Bond University, who they play in the Qualifying Final this Saturday at 11:00 am also at Leyshon Park.

If they win, they are straight through into the Grand Final.