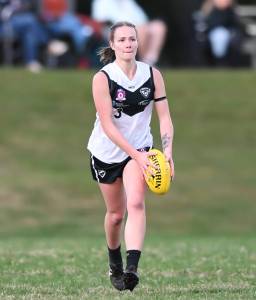 The Southport Sharks QAFLW senior team have lost the top of the table clash with UQ by 14 points.

It was an entertaining game of football, but in the end last year’s premiers were too good.

The Sharks kicked the game’s first goal through Georgia Eller, before UQ kicked two steadiers to lead by 5 points at quarter time.

The Sharks came out much hungrier in the second quarter, kicking five goals to two to lead by 13 points at half time.

The third quarter belonged to UQ. The Red Lioness’ were able to lock the ball inside 50 and take the lead off Southport.

It was set up for an exciting last quarter, with UQ holding a three-point lead at three quarter time.

Southport Coach Ryan Davis said, “It was disappointing not to win. We had our chances, but we didn’t take them, unfortunately.”

This week they play fifth placed Coorparoo in their last home and away game this year.

As the competition is so tight, the third placed Sharks need to win to 100% lock in a finals berth in their maiden season in the QAFLW.

Davis said, “This week is an important game, but we are really looking forward to the challenge. We have a resilient group, and I believe we have what it takes to ensure we get the four points.

This week all QAFLW games – seniors and reserves will be played at Leyshon Park on Saturday as part of Pride Round.

Southport’s seniors’ game will be at 12:00pm on Oval 1. For more info click here

The Southport Sharks QAFLW Reserves team are back in the winner’s circle after defeating the University of Queensland by 14 points on Saturday Night.

It was an even first quarter before the Sharks got to work in the second and third quarters to lead by 14 points at three quarter time.

Kaylee Kimber and Jess Brock in the middle of the ground were the standouts for the Sharks.

Maggie O’Connell was the leading goal kicker with two goals.

Southport Coach Mal Smith said, “It was a great win. An important win. It was great to get back in the winner’s circle after two tough games against Bond University.”

This week Southport play Coorparoo as part of Pride Round for the last game of the home and away season. The game will take place at 10:00 am on Oval 2 at Leyshon Park. For more info click here