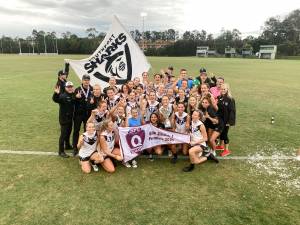 AFL Queensland has granted the Southport Sharks Football Club a licence to compete in the 2022 Bond University QAFLW commencing in April next year.

The addition of Southport will see the Queensland state league women’s competition expand to nine teams, endorsing another significant milestone for the competition.

Southport will join Bond University and Coolangatta as the third QAFLW team based on the Gold Coast.

“AFL Queensland is thrilled to see Southport elevated into our premier state league women’s competition after two years of hard work, determination and success,” she said.

“Female participation is the number one growth area in football within Queensland and expanding the Bond University QAFLW to nine teams ensures we can continue to support that growth.

“It’s also really important that we continue strengthening the talent pathway for those players who want to pursue the opportunity to play at AFLW level and the addition of a third Gold Coast based club will allow for that.”

Since joining the AFL Queensland senior women’s community football competition in 2020, the Sharks have been a force to be reckoned with, winning back-to-back QFAW Division 1 Premierships, and only dropping two games in the process.

“We are thrilled to be joining the Bond University QAFLW and are so proud of what our players and coaches have achieved in the QFAW Division 1 over the last two years,” he said.

“The Southport Sharks have a rich and proud 60-year history, and we are so excited about the journey we are on.”

“To have a direct pathway for our Southport juniors from NAB AFL Auskick to QAFLW is going to be exceptional for women’s footy at the club.”

With the introduction of a ninth club, each competing team will now have two fixtured byes, expanding the home and away season to 16 rounds.