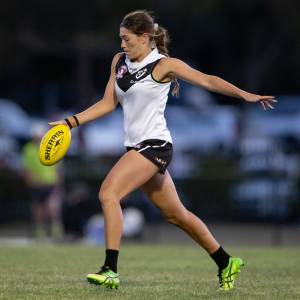 The Southport Sharks would like to congratulate Southport junior Giselle Davies on being drafted to the Gold Coast Suns at pick 30 at the NAB AFLW Draft which was conducted on Tuesday Night.

Davies is a much-loved person at the Sharks who played in the inaugural Sharks women’s premiership last year and was part of last year’s Under 17 girls premiership team too.

In total, she played over 50 games for Southport as a junior and in 2019 won the Under 17 league best and fairest.

This year, Giselle was part of the Bond University QAFLW team that made the Grand Final.

Being a member of the Sun’s Academy, Davies will be a great addition to the Sun’s AFLW list. She is a key defender who is very strong in the air and can win her fair share of contests at ground level.

Coming from a netball and touch football background, Davies started playing AFL when she was in Grade 9 after fellow Gold Coast Sun Annise Bradfield asked her to play at the Sharks.

Now her three younger sister’s play too, including Fleur who she played in the Under 17 premiership team with last year and is now in the senior women’s team.

Sports success is in the Davies family with Giselle’s Dad – Darren playing Rugby for Wales and her Mum – Simone dancing in the royal ballet.

Like many at the Sharks, Women’s Football Manager – Blair Cearns is so proud of Giselle.

Cearns said, “We are all so proud of her. She is such a humble person, and I think it’s just fantastic that she has been awarded with the opportunity of a lifetime to play AFLW. Giselle and her family have been so amazing for this club, and I just can’t wait to see her play for the Suns.”