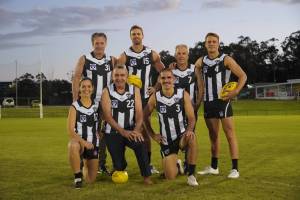 This Saturday, the Southport Sharks will celebrate their inaugural Heritage Round at Fankhauser Reserve against Sandringham.

The Southport VFL team will be wearing a special guernsey that celebrates the club’s 61-year history as both the Magpies and Sharks.

The guernsey brings together the magpie stripes and the V from the Sharks plus a black collar – which the club’s original guernsey featured.

One of the Club 61 organisers is Dean McMahon, a past player, and parent of players at the Southport Juniors.

He said, “Club 61 has been established as a connection point for all of our club, our past players and officials’ group, plus all of our current men’s, women’s teams, and also the junior club. It’s a great way to enhance a community feel and hopefully bring people together across all ages of the club.

“It’s been an exciting project organising the day, as we really do have an extraordinary history and one we are extremely proud of. ”

“It’s been fantastic to receive the support from the current player group, they’ve been a real partner in establishing this initiative. And yes, the past players are definitely showing their enthusiasm too, with many looking forward to catching up with old teammates they haven’t seen for many years. We have past players flying interstate from Melbourne and as far away as Perth. It really is great to see the support for the day.”

The day will feature a marquee for past players and an event after the game including an auction of the special Heritage Round guernseys.

An important part of Club 61’s vision is to connect the past players back to the club and also form a strong connection with our junior club.

“We are excited to help bring the senior and junior club closer together, and we are looking forward to launching some of those efforts on Saturday.”

There will be junior exhibition games at half time in the VFL on Saturday. In future home games, our juniors will tour the senior club change rooms, and hear from former Southport Juniors who play in the VFL team.

There will be a triple-header of games at Fankhauser Reserve on Saturday, with the VFL game starting at 12.05pm.

Southport is currently second on the ladder, and Sandringham is third, so it should be a great game.

The Southport QAFLW senior and reserves teams, both on top of the ladder, will be playing afterwards against Maroochydore at 3pm and 5pm, respectively.

If you are interested in attending the match, all match information is on the Southport Sharks website – www.southportsharks.com.au/football