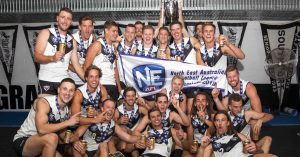 The Southport Sharks have claimed their first NEAFL Premiership by overcoming the Sydney Swans by 55 points at a very windy Fankhauser Reserve. Kicking with the aid of a strong breeze in the first quarter, Cody Filewood opened the scoring 16 seconds into the game with a great goal on the run. Johnson goaled then Hancock followed with a brilliant snap but the lead was only 17 points.
Three goals to one into the wind during the second term set up a 28 point half time lead and the game was there to be won if we were good enough.

Wilkinson, Dale and Johnson goaled early in the third term and the game was effectively over. 60 points was the margin at three quarter time. What ensured at the start of the final quarter will go down in football folklore. Sydney called for a head count and we had 19 players on the ground. Despite the protests of Sydney Swans officials, cool heads prevailed and the NEAFL hierarchy ruled that our score would stand. We cruised through an uncertain final quarter to finish 55 points in front. Emotional scenes followed as the Premiership Cup was handed to Coach Steve Daniel and Co-Captains Andrew Boston and Seb Tape.

Presentation Night
Presentation night was held in the Dempsey Room at the Sharks Events Centre on Wednesday September 19th. The award winners were as follows;

Congratulations to all the award winners and the 23 NEAFL Premiership Players of 2018. Thankyou to the Football Sub Committee, Coaching Staff, Strength and Conditioning Staff, Medical Staff and our team of volunteers who all played a role in re-establishing the Southport Sharks as a power in Australian Football.

Did you get snapped at the Awards Night? Check out all the photos on Facebook.