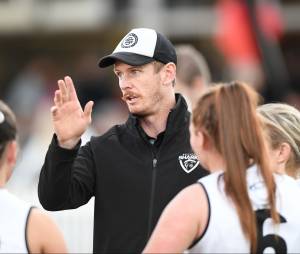 The Southport Sharks women’s team has completed their first three weeks of pre-season ahead of their first season in the QAFLW.

The training block included a beach session, a cycle class at Sharks Fitness Centre, plus skills and conditioning.

Head Coach Ryan Davis was thrilled with the girls’ effort over the three weeks.

“It was a solid block of training, “said Davis.

“We have been slowly building their fitness levels and skills over this period, and we are happy with where they are at.”

Southport now has two women’s teams – the QAFLW and QAFLW Development league, which means there are a lot of new players.

Despite plenty of new faces, Davis has been impressed with the culture and is happy with the way the group has started to gel together.

“It feels like our culture has carried on from the last two years, and it is terrific to see the older girls welcoming the newer girls.”

There is a lot of unknown about how the Sharks will go in the QAFLW.

Although it’s hard to tell how the club will go, Davis said that their preparation for the season has been so good so far.

“Every club is doing well this time of year. It’s too early to tell how we are going to go. What we do know is that we have just got to keep focussing on preparing ourselves for the year ahead.”

The team will return in early January before the season starts in March. Pre-season matches and the home and away fixtures have yet to be announced.