SHARKS WINNING STREAK CONTINUES WITH ANOTHER BIG WIN OVER BRISBANE 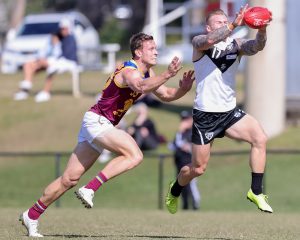 It was the usual suspects – Jacob Dawson (31 disposals and 6 tackles), Michael Manteit (30 disposals and 10 marks) and Andrew Boston (28 disposals and 9 clearances) who just know how to get the ball and make the most of it.

It was a danger game for Southport, although they had beaten the Lions last time they met by a similar margin, because the Lions by more AFL listed players this time and were looking for revenge.

“It was so important to have the right mindset going into this match,” Southport coach Steve Daniel said after the match.

“We really wanted to start well, and just quash any chances the Lions had of beating us.”

And quash it, they did.

The Sharks came out on fire and kicked the first five goals of the match, into the wind. From there they were able to keep the foot on the throttle and extend the margin to over 100 points again.

Attention now turns to Saturday’s blockbuster game against the Northern Bullants, who are on a three-game winning streak.