SHARKS WIN IN A CANTER 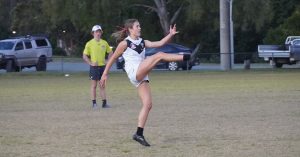 The Southport Sharks QFAW team had a big win over Kedron by 89 points on Saturday afternoon in Brisbane. The Sharks dominated from the opening bounce, leading by 32 points at Quarter Time. Determined to have a four-quarter performance, Southport continued to win the ball out of the middle and hit the scoreboard. Kedron had no answers and the majority of the game was played in Southport’s forward half of the ground.

Zali Cheffers and Hannah Davies made the most of their opportunities. Cheffers kicked four goals and Davies kicked three, providing plenty of headaches for the Kedron defence. Maddy Watt also provided the team with her usual spark and Emily Stewart had another great game in the midfield. Zoe Haines continued her great form and the defence held sway to keep the Lions scoreless for the day.

Southport has now won six games in a row and sit in second place on the ladder, two points behind Surfers Paradise. This week, they play the Burleigh Bombers who are currently third, and have not lost a game since the Sharks beat them in Round 3.