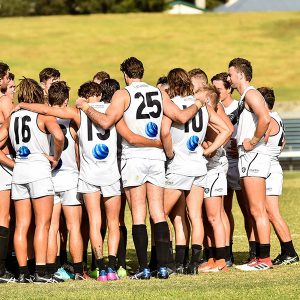 Our biggest challenge of the season was a bridge too far on Saturday as we fell to one of the more established sides in the NEAFL, Sydney University. Kicking into a stiff breeze in the first quarter, inaccurate kicking again haunted us as we finished with one goal four. We wasted some easy set shots whereas Uni made the most of their opportunities in front of goal kicking four goals two. The second stanza saw us get back in the contest. Clements kicked his second at the seven minute mark then Murdoch kicked the goal of the day from wide on 50. We were competing well and went into the half time break two points in arrears, but this could quite easily have been a narrow lead.

Sydney Uni stepped up a gear early in the third and slammed on four goals in nine minutes with the wind to blow the game open. Lucy bombed a goal from outside 50 followed closely by another from Young and we were well and truly on the ropes. We had already conceded our highest score against for year with a quarter to play. Manteit goaled at the 25 minute mark and a brilliant smother from Ellard saved another goal. At 32 points down it seemed too much but we were coming home with the breeze…

The coach made some positional changes in an attempt to give us a spark. Uni goaled first but two quick goals from Johnson gave us some life at the 17 minute mark. Unfortunately, Uni kicked two more and ended up 33 point winners. We have learned plenty from this experience and look forward to the return bout.

NEXT GAME – ROUND 4
Southport vs GWS Giants
Fankhauser Reserve, Southport
Saturday 5 May, 12pm
Live Stream all the action on NEAFL