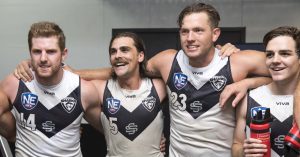 The Southport Sharks have stormed into their first NEAFL Grand Final after a comprehensive win over Aspley at Fankhauser Reserve on Saturday. The Sydney Swans now travel to Fankhauser Reserve this Sunday for a 1pm premiership decider.

In very heavy conditions, the Sharks won the territory battle early in the game but were only five points in front at quarter time. Mitch Johnson registered his 50th goal for the season but Tom Ellard suffered an ankle injury and would not return. The second term was goal for goal until Cody Filewood then Mitch Johnson extended he lead to 21 points at half time. The momentum was clearly with us at the main break.

A five goal to one third quarter including a “Boomer special” sealed the win as the lead was extended to 48 points at the last change. The contest was effectively over. As conditions worsened in the last quarter, the scoring dried up but the game was well and truly in hand. We were relentless in our attack on the footy and now only the Sydney Swans stand in the way as we play for our first ever NEAFL Premiership!