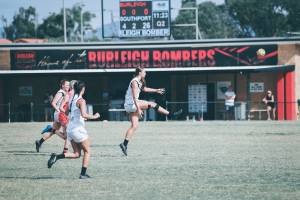 The Southport QFAW  team have won their first game of the year, defeating Burleigh by 71-points at Bill Godfrey Oval on Saturday Afternoon.

Disappointed after last week’s performance the Sharks made a statement, kicking twelve of the thirteen goals of the match.

Southport were looking to be stronger at the contest, more disciplined, and get off to a good start as these areas let them down last week according to QFAW coach Ryan Davis.

“It was a quality four quarter effort. I was so impressed with how the girls responded. We kept to the task and put our heads over the football,” Davis said after the game.

You knew the girls had come to play when Co-Captain Eli-Jay Beck kicked the first goal of the game within minutes and got the team off to a flying start.

Beck ended up with three goals and so did debutant Fleur Davies.

Like all the forwards, Davies played really well, taking some nice marks and finishing off her work, kicking the ball through the big sticks.

In the midfield, Victoria Winstanley was outstanding with her intensity and work rate at the contest.

Debutant Chantelle Winstanley also contributed two goals in what was a very promising first game for the club.

Lily McDonald had a new role in defence, and she played it perfectly, reading the ball well and winning her one on one contests.

Next week the girls face Robina, also away from home, with Davis really wanting the girls to bring the same intensity they brought against Burleigh.