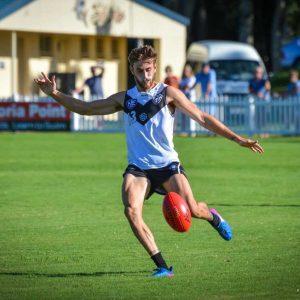 Backing up last week’s performance was always going to be a challenge and that’s how it played out in the first quarter against Redland on Saturday. The disposal on both sides was extremely poor, but Redland managed to scramble three goals as we passed up many scoring chances and went into the quarter time break 16-points in arrears. This was clearly our worst display in any quarter so far this year.

After some stern messages at quarter time and the move of Davis forward, we looked like a different side as Johnson managed the first of his four goals a minute into the quarter. We slammed on three more in the first 12 minutes to take the lead. We were seemingly in control, before a late lapse in concentration saw Redland score three goals in time on to go into the half time break with a 9-point lead. The lead changed hands early in the third, Johnson put us in front but as Murdoch left the field for treatment, Redland again regained the ascendancy.

A courageous mark and goal by Dylan Mutu, followed by Johnson’s third saw us head to the three quarter time break with an 11-point lead. A couple of bad errors early in the last had us defending grimly early on, but when Manteit ran into an open goal at the five minute mark, the lead was extended to 16-points. The exclamation point was provided by Fraser Thurlow who took a big contested mark inside 50 and calmly slotted the goal, which contributed to the 22-point buffer.