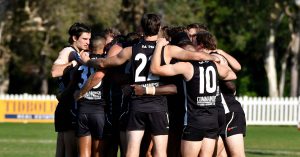 Southport Sharks have defied a seven goal last quarter onslaught to hold off the Canberra Demons in a shoot out at Phillip Oval in Canberra.

Sunny conditions greeted the Sharks and Josh Williams got us off to the perfect start with a goal inside the first minute. Ryan Davis gave Canberra a leg up when he had a shot at the wrong end but  Mentha, Hall and then Williams again all booted majors and we took a narrow five point lead into the quarter time break.

The second quarter turned out to be the Mitch Johnson show. Well fed by the likes of Fyfe, Fields and Mentha, Johnson kicked five for the term as we extended the lead out to 31 points. An undisciplined 50 metre penalty after the siren allowed the Demons to stay in touch, just 25 points in arrears.

Timakoi Bowie goaled early in the third to extend the lead back to 31, but the game changed at the 14 minute mark when Canberra slammed on three goals in three minutes to pull to within 16 points.

Mentha and Fields were able to steady the ship and the margin was back to 30 at the three quarter time break. The lead should have been enough against a vastly less experienced team, but you can never assume anything in this competition.

Coach Steve Daniel asked the boys to outscore Canberra early in the last quarter to ensure the win but the complete opposite was delivered. The Demons kicked two goals in the opening five minutes and it was game on. Johnson kicked a steadier but Canberra added the next three and were finishing hard. Josh Hall took a big mark and goaled but Canberra added another two goals to get to within three points at the 29 minute mark. The final siren sounded a minute later as Mitch Johnson duly slotted his 7th after the bell.