Sharks hang on to win thriller | Shark Tales Round 16 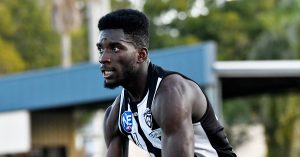 Southport Sharks have hung onto win a thriller by three points against a spirited Redland outfit at Scottsdale Park on Saturday.

Brodie Murdoch was a late withdrawal and Sam Jewell came into the selected side.

Josh Hall got the Sharks off to the best possible start with a goal 20 seconds into the match. Redland then  answered immediately and this was to be the pattern of the day. Hall marked inside 50 and goaled again then a clever snap from Fields and a set shot goal from Mitch Johnson extended the lead out to 15 points. For there it was all Redland as they kicked the last three goals of the quarter to lead by four points at the first change.

The second quarter was again a shoot out with both side adding five goals each. Tom Fields was providing a focal point up forward but we lost Lee Dale for the rest of the day after a courageous marking attempt resulted in a heavy collision with a Redland defender.

Three goals to two in the third term saw the Sharks go to the three quarter time break with a one point advantage and for once our conversion was keeping us in the game.

Redland struck first in the final term when Matt Hammelmann kicked his third but Charlie Ford levelled the scores again soon after. Consecutive goals to Trent Stubbs and Michael Manteit saw us extend the lead to 15 points and victory looked assured with five minutes left. Aaron Christensen had other ideas though and kicked two goals in a minute to reduce the margin to three points. Cool heads prevailed in the end and we hung on to win a classic game of NEAFL footy.