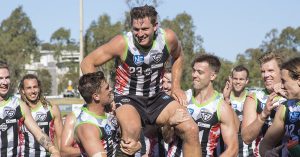 Southport have saved their best football for the right end of the season as they put paid to finals bound Sydney University to the tune of 80 points yesterday at Fankhauser Reserve. Wearing the HOTH (Heroes on the Homefront) charity jumpers, the boys looked very sharp as they dominated the Students.

Mitch Johnson missed an early opportunity when attacked by the “turf monster” but rectified the situation minutes later as he kicked our first goal 10 minutes in. Mentha and Williams both kicked great goals on the run as the Sharks started to assert their authority.

The second quarter started in a blaze of glory with early goals to Mentha, Johnson, Shaw and Stubbs and the lead was out to 34 points. Then there was a major swing in momentum as Sydney Uni kicked 3 unanswered goals to get back into the contest. Late goals to Fields, Williams and Johnson again steadied the ship.

The game was won in the third quarter as the Sharks slammed on six goals to one, including a Dylan Fyfe special and the lead had blown out to 64 points at three quarter time. The stats board has us well in front in all key areas.

The final quarter saw us add another four goals to one as Ryan Davis and SebTape both showed their aerial skills. The final margin of 80 points was unexpected but a great confidence boost heading into the Preliminary Final in two weeks.

Well done to the entire playing list who have won 13 games, eclipsing the 12 Home and Away wins of 2018.