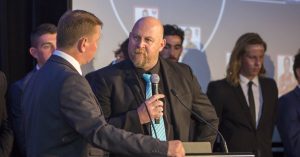 Southport have become the first non-AFL team to win the NEAFL Minor Premiership after finishing the Home and Away season on top of the ladder. A big win over Redland on Saturday has given us a week off and we will then host a Preliminary Final. The game started in ordinary fashion with the Sharks looking a fraction rusty early, conceding the first goal to Redland. Returning forward Brenton Payne took a great grab and goaled eight minutes in and this seemed to settle the team. Goals then to Reeves, Clayton, Boston and Wilkinson set up a 22 point quarter time lead.

Another five goals to one in the second quarter saw the lead blow out to 45 points at half time and the game was virtually over. Boston and Clayton were dominating in the middle and Redland had no answer. The lead was extended to 58 points in the third term and then Cody Filewood kicked three last quarter goals to bury Redland to the tune of 98 points. The backline, led brilliantly by Davis and Roos, did a great job holding Redland to only four goals for the day and the win finished the home and away season in magnificent fashion. Bring on September!

NEAFL MVP
Former Southport and current Aspley champion Matt Payne has taken out his third NEAFL MVP award on Sunday night in Sydney. Southport Coach Steve Daniel was named NEAFL Coach of the year, with Josh Clayton, Michael Manteit and Tom Wilkinson all being named in the NEAFL Team of the year. Congratulations to all.